As you all know, this past weekend was the 2010 Chicago Marathon on 10.10.10! I'll do a full post-race and race ratings later... I just wanted to let everybody know I finished state #41 and it was a sub-4:00 so I won't have to repeat IL. Also-- I had a ton of fun with my Floridian friends who ventured up for the race- CB, Hill, and Coach Nathan. That is about where the good news ends... and the Stress-o-meter begins!


1) My race started out very hectic as we had to RUN to 1) Find the assigned corrals and 2) Make it to the corrals as everything involved in the Chicago marathon is unnecessarily spaced out from the expo to the start and onto the finish.


2) I started with the 3:20 pace group and hoped to hold on for a while and maybe fall back if I wasn't feeling it. Well apparently this meant starting at a 7:20 min/mile pace. FYI- if you're doing a 3:20, this is a 7:37 min/mile split. Not only that but we were wall to wall with people through the whole race. Being so packed in meant you couldn't cut tangents, you were elbowed and shoved in every direction and it was impossible to navigate an aid station. 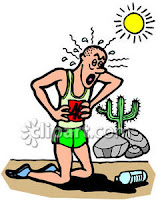 3) So I made a little error in judgement and chose to take an imodium before the race. I had heard from fellow runners that this could eliminate the need for a bathroom break... great! That 2 minutes could be the difference b/t making a guaranteed NYC time and not, just like at Omaha. Well if you don't know (as I didn't) imodium works by severely dehydrating you! I approached water stops like I had been crawling through the Sahara Desert for 3 weeks... GULPING down water and lemon-lime gatorade like it was my job. Oh gross! I got so full, but couldn't come even close to quenching a thirst...
4) ... This is when the vomiting began! I was so full and couldn't actually take in any liquids. My body began to reject them and I vomited from mile 16 to 26... I'm pretty sure I should get some kind of award for that!

5) And then it got hot and Stephanie got very dehydrated! I got a little of every kind of bad running visitor from Chills and goosebumps, to chest pains, to serious kidney pain. I continued to vomit anything I ate or drank and my insides started feeling like they were on fire. So many lessons learned in this race people!

Ok now that all the complaints are out I feel better! Onward and upward! Definitely a tough race and a struggle for most runners from what I can tell. It was fun being part of SUCH a huge race, but I think I'll stick to the middle-sized (1000-15000 ppl) races.
Steph's Finish: 3:43:41!
Not a horrible time considering the above, but I have to admit I was more than a little disappointed. I have a ton of races in a row coming up and it's going to get harder and harder to get a PR until I get a week or 2 of a break... you know, in December.

Will you be running to Canada??? Cause I will! Detroit this weekend for my (ICKKKKK) neighbor to the north-state marathon. I WILL be wearing my Ohio State gear....!!!!!!!
Happy (and healthy) Racing!
Stephanie
"Run to Win" -Meb
Posted by Stephanie Nichole at 10:24 AM