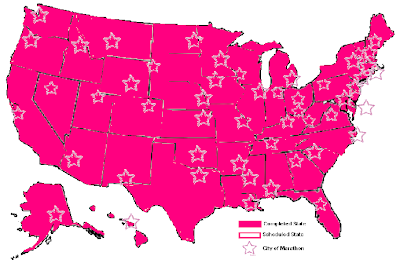 "Do your thoughts switch to the next scheduled race immediately after finishing a marathon?
Are you signed up for more than one race right now?...
Do you have so many marathon medals that you've run out of room on the hook they hang from?...
When asked by loved ones what your plans are for the weekend, you feel guilty telling them your running another marathon so you tell them "it's only a half this weekend"?...
Well if you answered yes to any of these questions, you just may be a Marathon Maniac!!!"

To become a certified "Maniac" you need to complete different sets of criteria that put you under different levels. In October, I hope to jump alllll the way up to Iridium Level but doing 2 marathons back to back in the same weekend. That's 52.4 Miles in 1 weekend! I've made a list of my Maniac "Level" Goals...

~Gold: June 13, 2009 ~ Hatfield-McCoy Marathon~ 4 Marathons in 4 US states in an 8 week period (this will include Nashville, Vermont City, SunBurst and Hatfield-McCoy).
~*COMPLETED*~