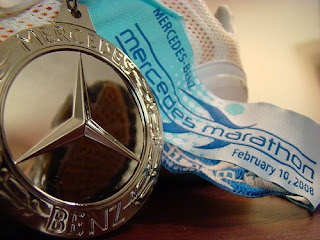 Posted by Stephanie Nichole at 7:25 AM 0 comments

What more is there after you go to Disney World???... Alabama-- Duh!

Soooo the leg pain is gone which means.... let's plan more marathons!!!
I've decided on my next one-- The "Mercedes Marathon" in Birmingham Alabama-- Please feel free to be VERY jealous :0\ The race is on February 15, 2009, if anyone would like to join!!! I've also signed up for the Nashville Country Music Marathon in April and guess what? CB will be doing her 2nd marathon!!! 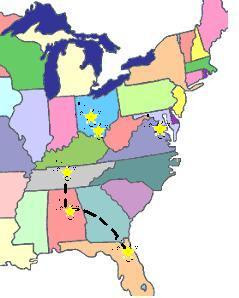 Soo... why Alabama? I'll be doing this marathon for a few reasons...
1. The Myrtle Beach Marathon was closed out! Juuuuust Kiddddding......... but seriously, closed!! WTH?
2. You get a Mercedes if you finish-- Again, kidding! But that would be really cool. HOWEVER-- you DO get a LOT of free stuff!!! They're actually known for that. Apparently they have a ton of sponsors and they're always giving away free things. yayyyy
3. A group of the galloway runners from Cinci will be carpooling down-- always nice to have people to travel with!!
4. I'm not sure if this is a reason to or a reason NOT to, but... this is the course elevation chart. You do 2 large 13 mile loops, so you get that very very large hill TWICE. One of those times is between 19 and 23 miles. It's going to suck... but hey, a challenge is always good, right? Maybe?? Anyone???

Disney released their pictures... I've added them to the old ones I already posted and deleted that post....

Go to ImageShack® to Create your own Slideshow
Posted by Stephanie Nichole at 1:36 PM 1 comments

The Next Day... Thoughts on the Disney Marathon

4.5/5.0
Well... It's one day after the race and I thought I would include a few thoughts/suggestion/pointers.... Whatever you may want to call it.
The Good...
1) The race was great! Very well coordinated. The start went off at exactly 5:50. Since I was in the first group behind the elite runners it only took about 1.5 minutes to get to the start. That's only because we took our merry old time getting to the start and were at the back at the A corral. Water every 2 miles... although NOT all on mile markers... which can be hard if you're doing run/walk splits and want to do 1Mile/1min
2) If you are situated in a lower group and want to move up... fold your bib and PIN it down so u can't unfold it. If you have an unlikely number for the group you are trying to sneak into you can also fold your bib the long way to make it look shorter, or tell them you were moved up a group at check-in--- This worked well for CB as we snuck her into group A with an 18,000-something number.
3) There was entertainment almost the ENTIRE way from the fire works right next to you at the start to the characters, music and gospel choir at the end!! There were a couple miles in the back lots, but they filled those with interesting facts and other things to think about. The only place I found lacked characters, music, etc. was between 23 and 26... There wasn't much.
4) Your "ChEAR squad" was adequately prepared! They provide 2 tools that I posted below-- Runner Tracking and Tool to locate where your runner will be based on time. BOTH of those worked superbly!!! MB and Michael were getting texts at 5:50 am!!! ... which I'm sure they appreciated. Ben-- my chEAR squad-- was able to find me at EVERY stop they had listed.
The Bad...
5) $$$-- Expect to lose a LOT of it! The price of the marathon truly reflects the destination. It is a rather expensive marathon. As are the hotels that weekend, and the merchandise. AND there is NO discount or free passes for the theme parks!!! HOWEVER-- you get a GREAT long sleeve breathable stitch running shirt, and the entertainment throughout is priceless.
6) HEAT!!! This if Florida after all... throughout the week we thought we would have light rain. Well... that was not the case at all. About 2 hours into the race the sun came up, clear skies, and HOT! I've been in Florida for the past 6 months, and I still thought it was HOT! And shade wasn't always easy to find.
7) If you're not used to getting up at 3am (and I mean the ENTIRETY of you-- even the potty side) then this might be tricky. The roads close at 4am so you'll have to get your car to epcot or yourself on a monorail before 4am! If you're a very .... ahem, "regular" person, the 3am wakup call may prove difficult.
The Ugly...
8) DO NOT use running flats unless you can run ...3:15 or less!!! They hurt hurt hurt. There was virtually NO shock absorption and now my legs hurt and my ankle is QUITE swollen.
9) My thoughts on running shorts: You know true "Running shorts" with the little fake undies built right in? Yeah those are TERRIBLE for chafing. If you wear them use body glide (Yeah CB, I know!!!)! (as you can tell, this was a bit of an uncomfortable marathon for Moi!). Both of these things I purchased at a Nike Town. Welll... it's back to ALL mizuno for me!!!
By far the best shoes, shorts, etc. in the running world...
http://www.mizunousa.com/running?openform
Posted by Stephanie Nichole at 6:39 AM 0 comments

So Disney Marathon 2009 is over. I decided to run with CB. We were making great time.... then we hit magic kingdom and decided it was more important to take pictures with pirates than to make any sort of good time lol! Soooo... we HAD FUN!!!!!! Wooohoo. My ankle suffered a bit--- some weird tendon is VERY sore right now, but I'm sure it will be fine. CB finished her FIRST marathon!!! Woohoo. Good times were had by all!

Some pictures from the marathon using my TINY snapshot $20 Camera...
ATTENTION: Pictures have been moved to the slideshow above to make room... Thank you!
Posted by Stephanie Nichole at 4:07 PM 0 comments 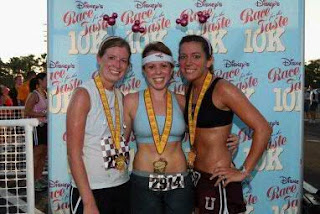 In Celebration of TWO DAYS until Disney I thought I would include a picture of my most recent Disney World Run "Race for the Taste 10K." Nash on the left ran her first 10K!!!! She will be coming to chEAR on the marathon runners this weekend... She and Ben will be chasing me around Disney World!!! CB in the middle will be running her FIRST marathon at Disney this weekend!!! Yahhh Good Luck CB!!!

Posted by Stephanie Nichole at 6:04 AM 0 comments

4 Days to go until Disney Marathon, here are a few thoughts going through my head and things to remember....

1) REST REST REST. I'm only staying up late ONE night this week (OSU was in the fiesta bowl), besides that I'm trying to get as much sleep as possible. I got 11 hours last night!!! Yes that's right-- I went to bed at 7pm (Lame... but it will be worth it).

2) Pack Early!!! I'm fairly forgetful so I'm packing tonight. I'm not leaving until Friday so as I remember things I'll either add them to a list and put that with my bag or I'll actually pack the items if I don't need them. *** I'll go tonight to my usual running store to get my GU, if they don't have the flavors I like I'll have time to look elsewhere

4) I have a ChEAR'ing squad- so I've already planned a route for them to find me and I've signed their phones up to give them updates during the race... don't want to worry about it the day before. :)
Spectator Interactive Map: http://disneyworldsports.disney.go.com/dwws/en_US/marathon/spectator/detail?name=SpectatorDetailPage

5) Update/Create my Playlist!!! I've gotten a good number of songs from the Disney Running Forum and I'll have to update AND CHARGE my iPod this week. Probably tomorrow night. Lyrics and Quotes to Run to from DRF:
http://disneyrunning.com/forum/viewtopic.php?f=2&t=3343&st=0&sk=t&sd=a&hilit=quotes

6) Pancakes!!! I ALWAYS eat pancakes the morning of my marathons-- strange, but it works for me. Seeing that I'll be staying in Orlando I'll have to find a way to get pancakes at 4am. I will look into this tomorrow... maybe the hotel will have them???