So it's taken me about 5 days to finally write about my "Vermont Experience." If you've been following along, I've made 2 unsuccessful attempts at my Boston qualifying time of 3:40:00(3:40:59 with the grace period). The first was ING Georgia where I was so close, but no match for those Atlanta hills coming in at 3:47 (still a PR). The second was Nashville CMM that seemed like the perfect course. Apparently the sun thought so as well and came out to play, providing the runners with a scorching 85 degree heat. After the mix of hills and heat I wanted to find a nice marathon with gently rolling hills and nothing too humid... finally, Vermont!!! The state of lakes, Ben & Jerrys and... Umm... yeah- Lakes and Ice Cream.

Race Day Eve...
I flew out to Vermont on Saturday (5/23) and landed around noon. Just a tip if you ever fly into Burlington... carry cash!!! The rustic feel of the town carries over into their technology. When I got off the plane I met up with CB and Hillery who had flown from Florida to run Vermont City. If you remember, CB did her first marathon in January with me and I've convinced her to follow it up with 2 more in the same season! We waited for the parentals to drive into town (Albany is only about 3 hours from Burlington). We made our way around town, to the expo, and finally to Bove's Italian restaurant which made for a great spaghetti dinner! This restaurant was strongly recommended to us, although the pasta dinner was hosted by Juniors. If you go to Bove's I recommend their vodka sauce!!! Follow it up with a little ice cream from Ben and Jerry's!

Race Morning...
In the morning we awoke to an overcast in the mid 50's with just a hint of rain. MB, Mike, and I ate at the hotel then made our way over to the race where we met up with MB's running group... The Albany Running Exchange/. The starting line had plenty of area for runners to warm up, hangout, or-if you were part of ARE- get a pre-race massage! During the drive over to the start there was a light sprinkle that continued through our warm up time and into the start of the race..


The Race... (Stephanie vs. Vermont)
With only about 2,400 runners-- a modest size compared to some of my recent events-- the start wasn't crowded at all. With the light rain hanging over us, the starting gun was sounded and the race was off. Miles 3-6 provided a longggg sloping down hill that we would have to complete before turning around and testing ourselves running in the less forgiving direction... 3 miles up hill!!! This is the time that the clouds decided to really let us know they were there and the rain started to come down a little hard. Surprisingly, it was actually kind of nice! There was no humidity and the rain was just enough to keep you from getting hot.


I ran the first 18 at about an 8:00Min/Mile pace and slowed down to about an 8:10 min/mile pace by 21 (potty break). To obtain my Boston pace I needed an average of an 8:23 pace and I was about on track! The entire course of Vermont was gentle sloping hills with very little noticeable flat roads. However, the last 4 miles are run on a straight, narrow, bike path. If you have been reading along with the blog you will know that I HATE flat marathon courses. I think they're painful and boring! Besides that, the trees above blocked my GPS on my garmin and I was running blind without a pace. The bike path got the best of me and I struggled for the last 4 miles. I made my way out of the bike path and onto the bigggggg loop for the last .2 of the race. By this point my legs felt like lead. I tried to push myself just a little further. I could see the finish coming up. Struggling in the last 200 meters I finally made it to the finish line and saw the clock... 3:41:13!!! That's right... I missed Boston qualifying time by 14 seconds!!!

After the race I quickly ran to CB & Hillery's room to shower and ran back to the finish to see MB finish her race... with a shirt full of blood!!! Apparently her shorts had chaffed away her side and started bleeding (pictured below). Somehow the crazy lady didn't feel it and didn't even notice until after she was finished. CB finisher her THIRD marathon of the season and Hillery finished her 2nd marathon after having only about 20 days to prep!!!! Congrats to the runners!!! 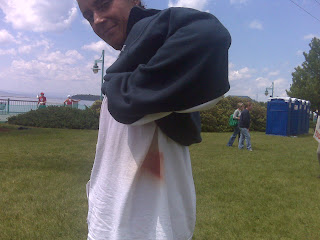 Lessons Learned...
I have Sunburst marathon coming up in about a week and knowing that I'm going to make some necessary changes so that I can finally make Boston. 1) Shoes! My running shoes have seen 4 marathons this year and have gone well over 700 miles-- no WONDER my legs hurt so much!!! 2) Stick with what works!!! The race offered 2 stops with "Carb Boom" instead of "GU" and I chose to use those instead of carrying my own. The effects weren't the same and I'll make sure to use only what I know works for me!!! 3) Run your own race. Many parts of the course had large crowds of people, or large downhills that may entice runners to push themselves. Using my garmin I was able to keep myself on MY pace and that really helped!

The Silver Lining... I'm a maniac!!!
Although I wasn't able to make Boston I was able to make the marathon maniacs!!! I described the maniacs during my prep for Vermont. As I mentioned, upon completing Vermont I would have run 3 marathons in 2 months and would be able to qualify. I've created time goals for the various manic levels. Now, MB is trying to become a MM and apparently we could be the first Mother/Daughter team!!! You would think those crazy genes would pass on, but I guess not...
Posted by Stephanie Nichole at 7:03 PM